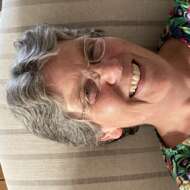 Experienced literary translator from Swedish and Finland-Swedish. Editor and reviewer.

sarahgdeath@gmail.com
https://uk.linkedin.com/pub/sarah-death/31/500/65b
Studied Swedish at Cambridge University and University College London (PhD 1985) with shorter periods at the Swedish universities of Uppsala and Växjö. Active as a freelance literary translator since 1987 with many full-length published works to her name. Mentor, editor and reviewer. Three times winner of the George Bernard Shaw Prize, most recently in 2021 for 'Letters from Tove', the correspondence of Tove Jansson. Awarded the Swedish Academy Translation Prize 2008 and the Royal Order of the Polar Star 2014. A director of Norvik Press since 2011.