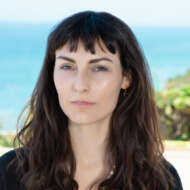 saskia.vogel@gmail.com
http://saskiavogel.com
https://twitter.com/saskiavogel
https://www.instagram.com/saskia.vogel/
My career in translation began in 2013 with a short story by Lina Wolff published in GRANTA magazine, followed by the BCLT Summer School and an Emerging Translators mentorship. I continue to translate strong voices from Sweden with unique perspectives. Working as a writer, I have found, enriches my work as a translator and vice versa. I also translate (and write) for commercial clients and the screen, as well as drama. In autumn 2022 I look forward to working on Linnea Axelsson's AEDNAN as Princeton's Translator in Residence. I was a finalist for the PEN Translation Award and won the CLMP Firecracker Award for Fiction. The Berlin Senate and the Swedish Authors Fund have been kind enough to support my work with working grants. My debut novel PERMISSION (Dialogue Books and Coach House Books, 2019) was translated into five languages, optioned for television, and longlisted for the Believer Book Award. Education: MA in Comparative Literature, University College London. MPW in Professional Writing, University of Southern California. Joint honors BA in English Literature and Film&TV Studies, Brunel University, London.