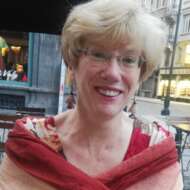 A lover of languages and literature and a confirmed internationalist who has lived in Europe, Africa and Central America, I am keen to build bridges through literary translation. My particular interests include social history, human rights, women's rights and feminism, racism and cultural diversity, justice and peace, and the natural environment.

As a civil servant at the Dutch Foreign Office, then the European Parliament and the European Commission, I have translated and edited scores of political speeches, press articles, reports, policy papers, web pages and legislative documents.

Since late 2014 I have served as reviews editor of the Swedish Book Review. Over the last four years I have translated five books by Swedish authors (Elisabeth Åsbrink, Karin Bojs, Torill Kornfeldt and Johanna Gillbro) and contributed a translation from German to 'Quest: Stories of Journeys from Around Europe', a collection for children edited by Daniel Hahn.

In 2015 I came second (out of about 200) in Geisteswissenschaften International's competition for non-fiction translation from German, and in 2018 I was selected to take part in New Books in German's scheme for emerging literary translators.

As well as translating books, I prepare samples for literary agents in Sweden, Finland, Germany and Switzerland, and write reader reports for Anglophone publishers. I have contributed translations and reviews to journals including the European Literature Network's Riveter magazine, the Swedish Book Review, the Baltic Sea Library, the Short Story Project, No Man's Land, the Cordite Poetry Review, and Litro. The translations I enjoy most are those requiring imagination, creativity and sensitivity to style, tone and register.

My source languages are Swedish, Dutch, German, French and Spanish, and I also read Danish, Norwegian and Portuguese.

I am a full member of the UK Society of Authors / Translators' Association.